Storks are frequently associated with babies in modern Western culture, from baby shower decorations to birth announcements, as well as being a droll way of putting off that infamous child’s question: “Where do babies come from?”  But where, in our popular imagination, did this image of storks come from? 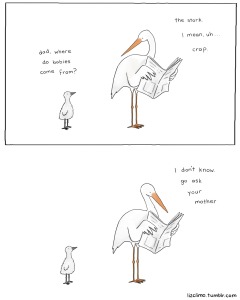 In several mythologies, storks are symbols commitment and fidelity, because storks are widely believed to mate for life–not entirely true, but they do tend to return to the same nests year after year.

Furthermore, the migratory patterns of storks lead to their association with birth. They “fly south in the fall and return to Europe nine months later. Usually they could be seen heading north and nesting around March and April. Babies born in March and April were likely conceived in June of the previous year. Midsummer’s Eve, which takes place on June 21, is a celebration of the summer solstice, but it is also a pagan holiday of marriage and fertility. As many marriages and other couplings would take place during this time, many babies would be born around the time that the storks could be seen flying north, making the connection that the “stork brought the baby.”” [source]

The widespread popularity of this myth, though, can be traced to Hans Christian Anderson’s 19th century short story The Storks. In in, a family of storks is revenged upon boys in town who threaten them by delivering a dead baby to the family of the ringleader.

“Yes, certainly,” cried the mother stork. “I have thought upon the best way to be revenged. I know the pond in which all the little children lie, waiting till the storks come to take them to their parents. The prettiest little babies lie there dreaming more sweetly than they will ever dream in the time to come. All parents are glad to have a little child, and children are so pleased with a little brother or sister. Now we will fly to the pond and fetch a little baby for each of the children who did not sing that naughty song to make game of the storks.”

“But the naughty boy, who began the song first, what shall we do to him?” cried the young storks.

“There lies in the pond a little dead baby who has dreamed itself to death,” said the mother. “We will take it to the naughty boy, and he will cry because we have brought him a little dead brother. But you have not forgotten the good boy who said it was a shame to laugh at animals: we will take him a little brother and sister too, because he was good.” 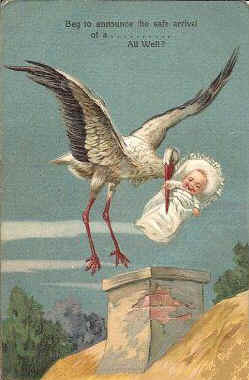 Thanks to ensemble member Amelia for the question and link!

This site is written and maintained by Ilana Brownstein and Ramona Ostrowski, members of Company One Theatre's dramaturgy team. Visit ENGAGE, the home of C1 Dramaturgy on the company website, and see what else we're up to! http://companyone.org/engage